The last few months have been bullish for Bitcoin in terms of adoption. Some of the largest companies in the S&P 500 and the payment processing sector have adopted the cryptocurrency. Among them, PayPal is one of the most important. Since its announcement, BTC has begun an upward trend that has pushed it to its peak price in 2020.

One of the most bullish investors in Bitcoin is former Goldman Sachs employee Raoul Pal. Since the beginning of the Pandemic, Pal has studied the impact that the crisis will have on the world economy. In that sense, he has indicated that « we are in a transition from the hope phase to the insolvency phase ». Growth in the major economies in America and Europe will take more than a « post-election stimulus package, » Pal said.

Most international stock exchanges and international currencies are on a crash trajectory. According to the analysis he has been doing for months, Pal believes that Bitcoin is the only asset that offers a way out of the crisis. Comparing Bitcoin’s performance with that of U.S. Treasury bonds, Pal said:

You can buy bonds and dollars or you can take the life raft – Bitcoin. Or to dampen the volatility of a risk-off event (we can and will see sharp BTC corrections), you can have all 3 for a near perfect portfolio for this phase… Good luck. See see how it plays out…

Pal added that Bitcoin is the best trading and investment opportunity he’s seen. Referring to the cryptocurrency as a « supermassive black hole, » he expects BTC to become the main asset to hedge against inflation caused by the Federal Reserve’s measures. Even possibly attracting the attention of gold investors:

Bitcoin’s performance is SO dominant and SO all-encompassing that it is going to suck in every single asset narrative dry and spit it out.

Bitcoin has outperformed gold and the major exchanges in the traditional market. Senior commodity strategist for Bloomberg Intelligence, Mike McGlone, has indicated that Bitcoin could reach $14,000 before the end of 2020. In addition, Bitcoin has begun to decouple from the Nasdaq 100 index, as shown below. 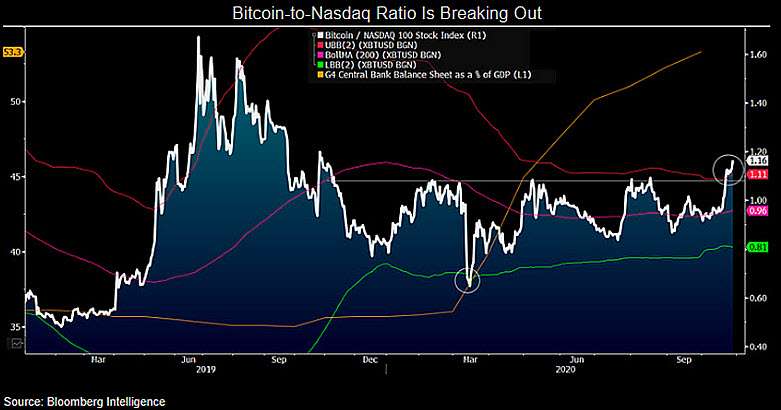 Bitcoin trader Josh Rager is also bullish about Bitcoin’s performance. Sharing the chart below, the trader stated that Bitcoin is close to breaking the $13,880 resistance and then « the sky will be open ». Rager added:

If I’m on the outside looking in, this chart is a positive sign with new monthly high potential.

Explaining the results of MicroStrategy’s investment in Bitcoin, its CEO reported that the company has had one of its best quarters in the last 10 years. The company reported earnings of $19.8 million compared to earnings for the same period in 2019 of $11.6 million.

The company’s Bitcoin profits exceed reported revenues. Its investment of 38,250 BTCs at a price of $11,100 is estimated at $525 million after Bitcoin passed the $13,000 mark. This represents a $100 million gain in less than one quarter. The company’s CEO has become an advocate of the cryptocurrency and has revealed that bought 17,732 BTC at a price of $9,882.

Some have asked how much #BTC I own. I personally #hodl 17,732 BTC which I bought at $9,882 each on average. I informed MicroStrategy of these holdings before the company decided to buy #bitcoin for itself.