BiFi directly connects Bitcoin and Ethereum networks on its platform so users do not have to convert Bitcoin to Wrapped Bitcoin (wBTC) or any other Bitcoin-pegged assets to use on DeFi. A third-party chain does not intervene in using Bitcoin. BiFi’s native Bitcoin lending and borrowing services allow users to avoid additional transaction fees as they do not have to convert Bitcoin into Wrapped Bitcoin and users can also avoid slippage problems during the converting process.

One difference, however, in using Bitcoin lending is that users will need to register three addresses before they start lending or borrowing Bitcoin on BiFi. Two addresses (Bitcoin deposit address and Bitcoin repayment address) are issued automatically to the user when they click on “Deposit Bitcoin.” Users will need to input the third address (their own Bitcoin address) for depositing Bitcoin to the BiFi protocol. 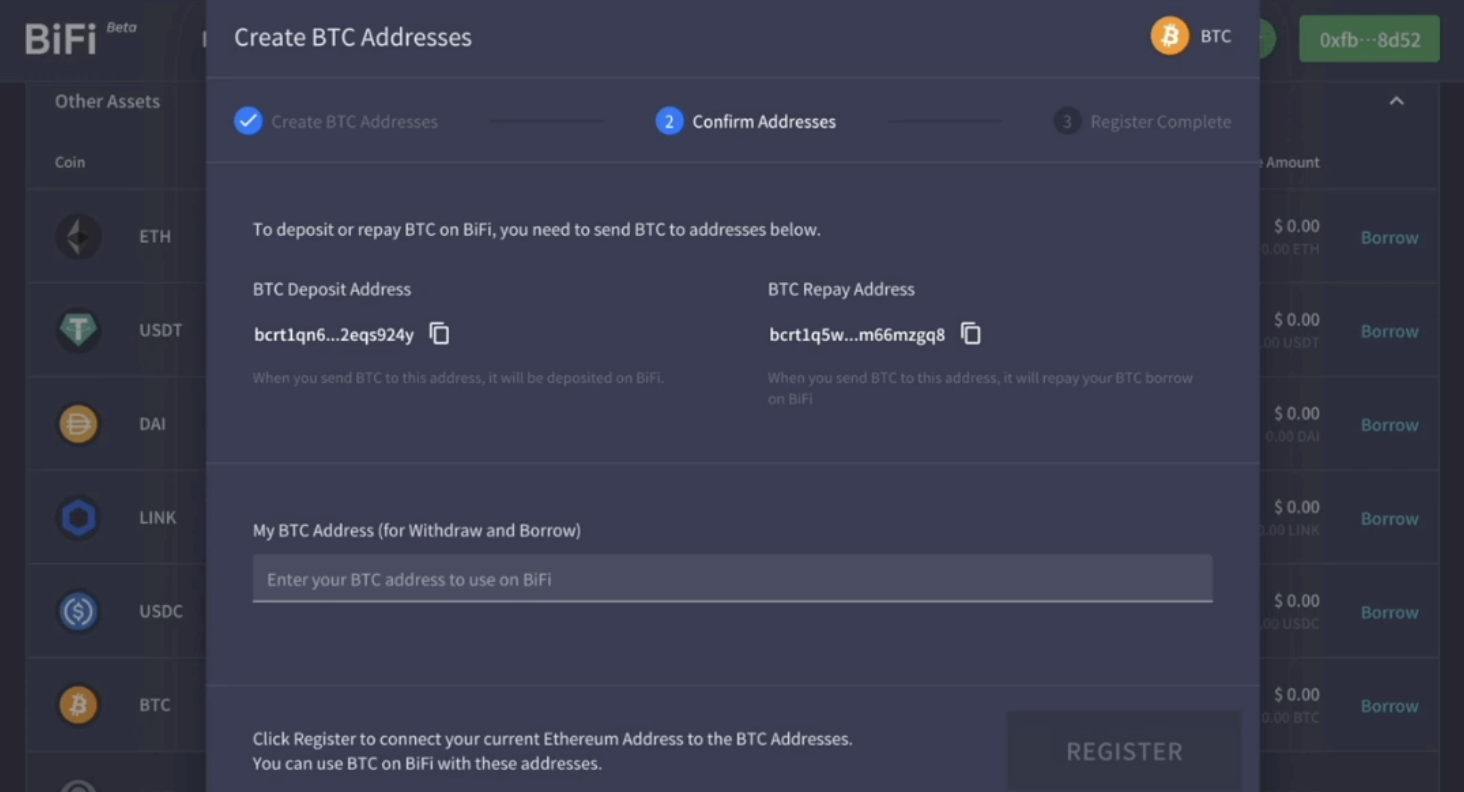 The transfer of data is important to Bitcoin-Ethereum connectivity. Transactions must be transferred from one chain to another precisely and without any error. This computational integrity of blockchain transactions ensures transparency and security.

BiFi utilizes this computational integrity of trustworthy blockchains rather than creating its own new chain. Bifrost uses cryptographic proofs to verify the accuracy of transactions on the Bitcoin network and on-chain on Ethereum smart contracts. BiFi uses Bifrost to verify that transactions are correct using the fraud proofs method. This is a method used in Optimistic Rollups of Ethereum chains on layer two.

Moreover, BiFi highly emphasizes the importance of protocol security. The BiFi team develops its own protocol codes and conducts several smart contract audits when it launches its new services and features.

Bifrost is a multichain middleware platform that enables developers to create decentralized applications on top of multiple protocols. Not restricted to a single blockchain, Bifrost creates a new environment where developers can combine the best protocols to develop substantially more scalable and flexible DApps.

BiFi opens a new era of DeFi, offering the first native BTC lending by directly connecting the Bitcoin and Ethereum network. Powered by Bifrost’s multichain technology, BiFi will connect not only Bitcoin, Ethereum and the Binance Smart Chain, but also other blockchains such as Polkadot, Klaytn, Cardano and more. Through this multichain connectivity, BiFi will lower gas fees, increase accessibility and expand the ecosystem to enable the creation of more innovative financial products for more people.

This is a paid press release Cointelegraph does not endorse and is not responsible for or liable for any content, accuracy, quality, advertising, products or other materials on this page. Readers should do their own research before taking any actions related to the company. Cointelegraph is not responsible, directly or indirectly, for any damage or loss caused or alleged to be caused by or in connection with the use of or reliance on any content, goods or services mentioned in the press release.