Since the white supremacist rallies in the US city of Charlottesville in 2017, the financing of far-right movements and figures has increasingly come under the microscope.

Experts told The Feed that in the past five years, neo-Nazis and members of the far-right have become more evasive and sophisticated at hiding their finances.

In May, Australian neo-Nazi and leader of the National Socialist Network Thomas Sewell was arrested by counter-terrorism police following an alleged assault in a Victorian national park.

Police claim Sewell, along with a group of Caucasian men, swarmed a car after noticing a man had been filming them.

It’s alleged Sewell, who was denied bail in June, punched the passenger side window.

Shortly after Sewell was arrested, one of his supporters took over his messaging channel on Telegram.

The Feed has seen Telegram messages, sent by an associate of Sewell, asking supporters to donate cryptocurrency to Sewell’s legal and prison fund.

The Feed has observed the removal of several fundraisers for Sewell on the crowdfunding site BuyMeACoffee. On Telegram, one of Sewell’s associates also regularly pleads for donations in the cryptocurrency Monero.

“The commies took down my previous fundraiser, I’ll just keep remaking them,” a message in Sewell’s Telegram read.

“The legal process is not cheap and every dollar donated towards it is a dollar saved from our movement funds.

“They are better spent on gym equipment, tech equipment and expanding our operations.”

A recent fundraiser claimed funds would go towards defending Sewell against charges related to the “Channel 9 incident” as well as charges associated with the alleged assault in the Victorian national park.

“Any leftover funds will be spent on increasing the racism capability of the Australian Klan,” a message in Telegram read.

Sewell was charged with assaulting a black Channel 9 security guard in March. In video footage seen by The Feed, Sewell appeared to punch the security guard several times in the head, while an unknown associate filmed the assault.

In the video, the guard was knocked to the ground and racially abused, with the associate telling him: “dance monkey, dance”

A spokesperson from the Australian Federal Police confirmed they had observed individuals attempting to raise funds for Sewell for legal fees and “other legitimate expenses.”

“Provided the solicitation and application of funds are clearly for the purpose of legal expenses or welfare issues, there is no illegality,” the spokesperson said.

“The AFP continues to examine whether groups and individuals breach Commonwealth laws,” they added.

“Our primary concern is when extremist views develop into planning or facilitation of violent activities, which constitutes a terrorist act.”

The use of cryptocurrency among the far-right and neo-Nazis is pervasive, according to US extremism researcher Professor Megan Squire.

“You can’t really be on the far-right without using, and being familiar with, cryptocurrencies at this point,” Professor Squire told The Feed.

“Four or five years ago that wasn’t true. But today, it certainly is.”

Professor Squire said the switch to cryptocurrency was largely sparked by members of the far-right being cut off from traditional financing methods like online banking and PayPal.

A spokesperson at the AFP told The Feed, “Ideologically motivated individuals and groups are more organised, sophisticated and security-conscious than in the past.”

John Bambenek, an American cybersecurity expert who built a neo-Nazi bitcoin transactions tracker, said the use of cryptocurrency is also tied to ideology.

“For neo-Nazi groups, if you truly believe this whole antisemitic nonsense, which includes the kind of Jewish world banking conspiracy, what else are you going to use?” The Feed has seen a now-deleted YouTube video of a prominent member of the far-right, Blair Cottrell, discussing his struggle to access his personal finances during a court battle.

In 2017, a Melbourne court convicted Cottrell of inciting hatred, contempt and ridicule of Muslims after making a video in 2015 in which he beheaded a dummy in protest of a Bendigo mosque. His attempt to appeal against this conviction was lost in 2019.

“I had my bank account my personal bank account, I was using to try to raise funds to keep paying my barrister, they closed it,” Cottrell said in the YouTube video seen by The Feed.

“So I just had to end up accepting the conviction because I couldn’t afford to keep paying the court fees.”

In the video, Cottrell also complained that he’d been ‘censored’ from social media, lost jobs due to his political ideology,  and had his PayPal account closed.

Sewell’s associate, who has been fundraising for his legal costs, also had his bank account shut down in July.

In messages seen by The Feed, the man shares a screenshot of a letter from his bank. He complains his bank advised him “they will no longer provide me with any services and are shutting down all my business accounts.”

What does the far-right use cryptocurrency for?

From fundraising for legal costs to buying exercise equipment for community gyms, there is a range of ways the far-right spends its cryptocurrency.

Professor Squire said those on the far-right are often tight-lipped about their earnings and how they spend donations.

“They don’t tend to be very flashy with their wealth,” she said.

“Even the guys that have tons of Bitcoin or got really big donations and stuff, they don’t tend to flash it around.” Professor Squire said displays of wealth are often frowned upon by members of the far-right or neo-Nazi groups.

“A lot of the guys that are involved in these movements are pretty working-class, hand to mouth kind of thing, but they’re not wealthy people,” she said.

“I think they would be really turned off if their leaders were doing that.”

Professor Squire’s research for the Southern Poverty Law Center showed a handful of leaders of the global white nationalist movement have raised significant sums of money through streaming platform DLive.

DLive was initially created as a video game streaming platform. It attracted many far-right supporters due to its loose enforcement of prohibited speech, which essentially allowed streamers who were using the site to say whatever they wanted.

In January, rioters used the site to broadcast themselves storming the US Capitol, with some earning significant donations for their live streams.

Streamers who use the site can make thousands of dollars thanks to donations from online viewers using a currency called “lemons”. The highest content creator using DLive netted USD $62,250.75 in donations from April to October 2020.

“I think it was a shock to a lot of people how much money they were actually pulling in because it was just the numbers were so high,” Professor Squire said.

“For the first time, we were able to uncover the transaction logs and show how much money these guys were making,” she said.

“It wasn’t really obvious to the outside world that they were absolutely just dripping in cash.” 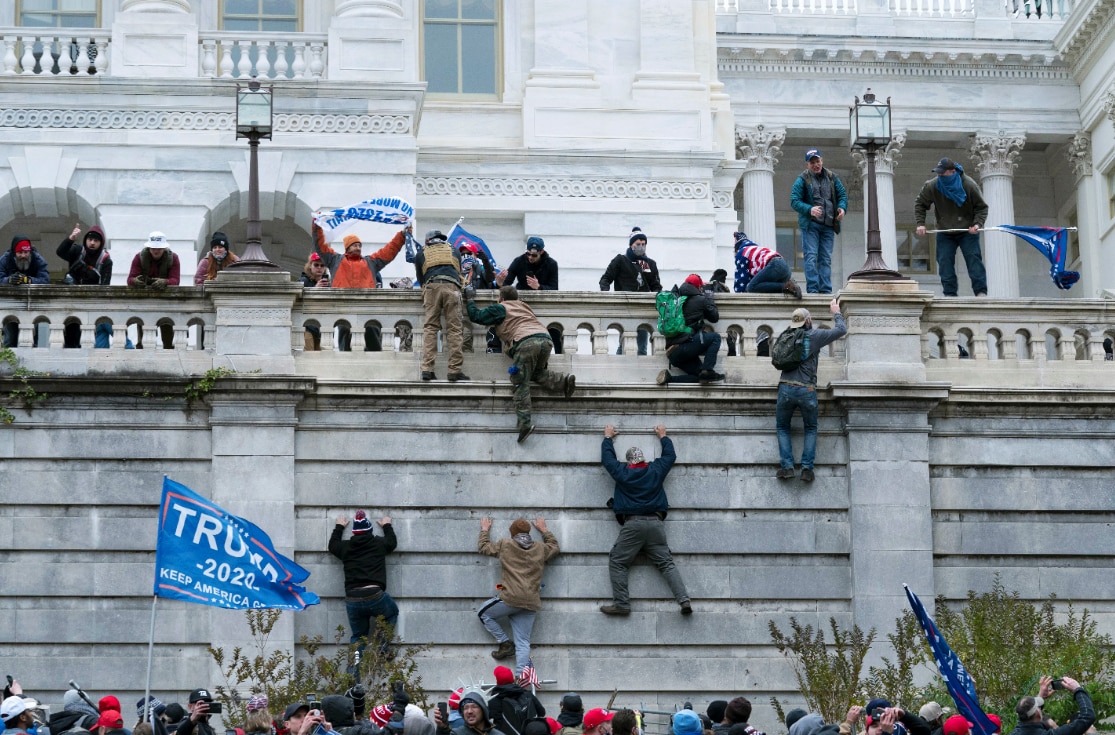 Supporters of former Preisdent Donald Trump climbing the west wall of the US Capitol in Washington during the 6 January riot.

How anonymous is cryptocurrency really?

Bitcoin is much easier to track than some other cryptocurrencies, according to Mr Bambenek. He told The Feed while Bitcoin is anonymous, it is not private.

“So you can enter in a wallet [address], see all the transactions in and out and whether it’s balanced,” he said.

Following the white supremacist ‘Unite the Right’ rally in Charlottesville, Mr Bambenek developed a Twitter bot to track the Bitcoin transactions of the far-right.

“What we noticed is because of the way I was providing transparency to what they were doing, their behaviour started changing,” Mr Bambenek said.

“Daily Stormer, for instance, very explicitly references an article I worked on CNN with as to why they switched to [cryptocurrency] Monero, which obscures the transactions.” 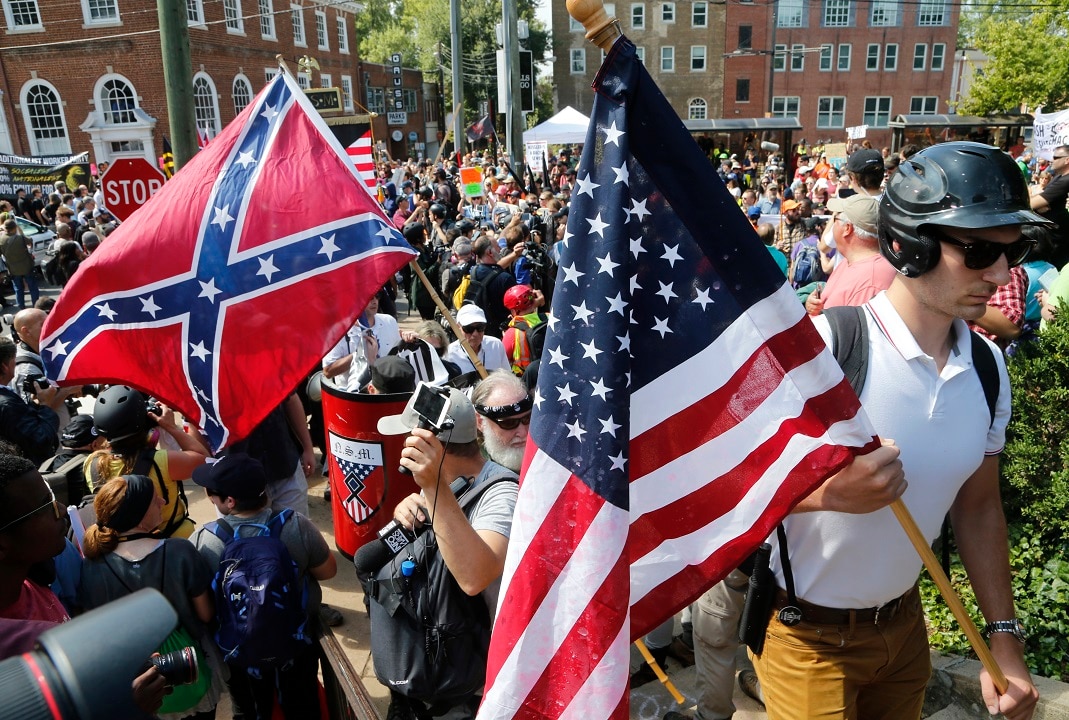 Mr Bambenek said Monero still has a public ledger but transactions are encrypted unless you’re a participant in the transaction.

“The data is still there, everybody kind of sees that there is a transaction. But you don’t get any detail [about addresses] unless you have the encryption key,” he said.

As the far-right become smarter at making its financing clandestine, there are tell-tail signs in their transactions of anti-semitic and white supremacist beliefs.

Professor Squire said Andrew Anglin, the founder of the neo-Nazi website, Daily Stormer, received two donations in the lead up to the Charlottesville rallies.

The unknown donor gave the amount 0.88USD once and then 14.88USD five days later.

“88 and 1488 are both, you know, tweaks on 14 words, which is one of the little slogans that they use to represent what they believe in as far as racism,” Professor Squire said.

“The 88 is for H,H, the letters of the alphabet. It stands for Heil Hitler.”

Professor Squire said she searched over 300 known wallets for Bitcoin and other coin addresses and found several 100 different transactions in those amounts. 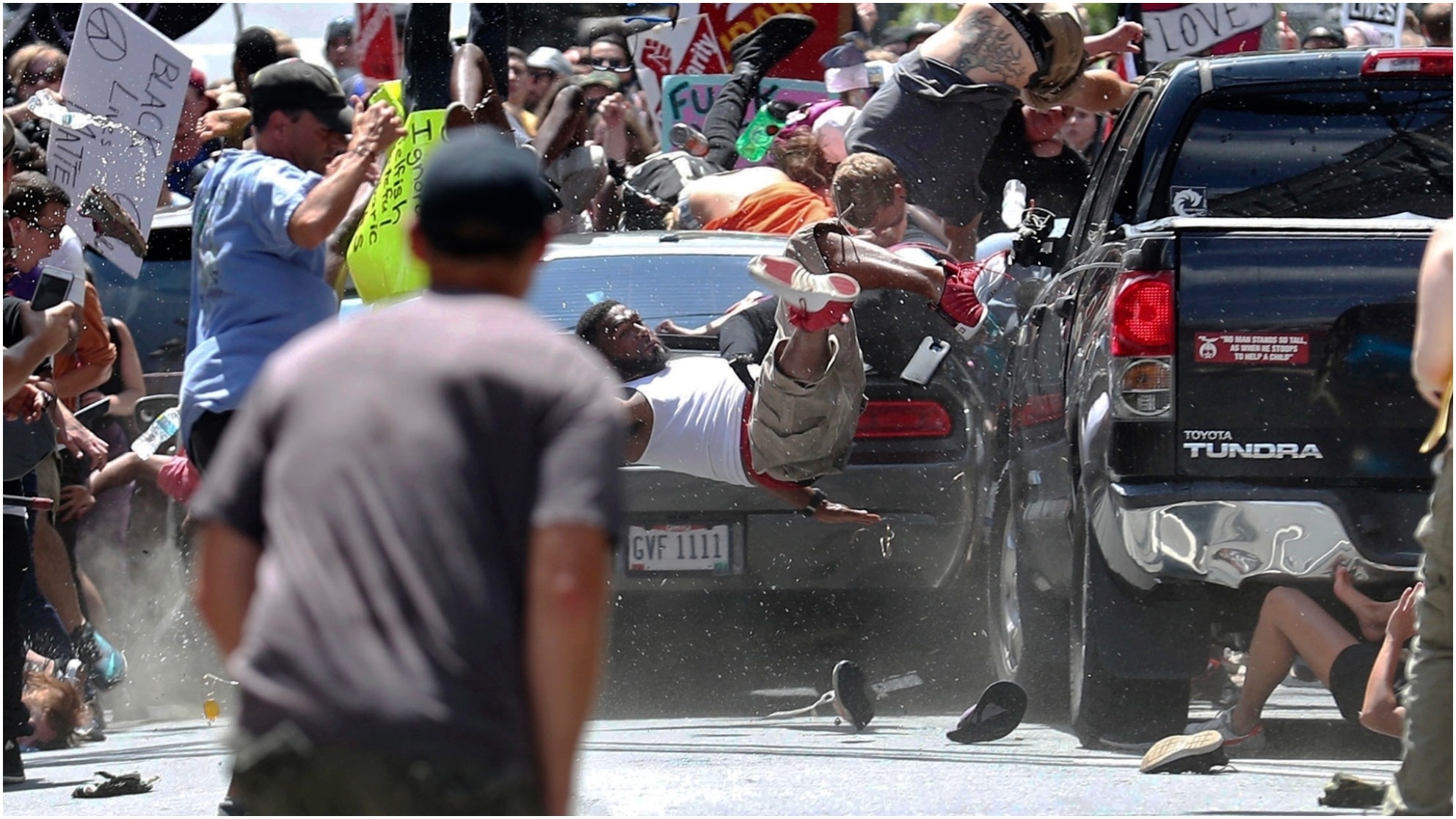 People fly into the air as a vehicle is driven into a group of protesters demonstrating against a white nationalist rally in Charlottesville.

Can the government stop the far-right from using cryptocurrency?

It isn’t feasible to ask cryptocurrencies like Monero to ban neo-Nazis from using digital currencies, Professor Squire said. She explained that often the people behind developing these currencies are unknown.

But it may be possible to put pressure on what Professor Squire calls ‘the two ends of the pipeline’.

“Monero, Bitcoin, whatever the currency is, at some point, it has to come out,” she said.

“You got to buy groceries, you got to put food on the table, pay your rent and your landlord might not take Bitcoin”

Mr Bambenek said laws should be strengthened to regulate Coinbase exchanges. He said governments can legislate to force customers to provide their identity.

“That’s the only real place of enforcement and some of those are willing to act and some try to stay under the radar.”

“But every time that we poke them and try to expose them and kick them off, they get a little bit better. And eventually, they’re going to get good.”