This article was written exclusively for Investing.com.

Weather conditions tend to be calm before hurricanes, monsoons, or other violent storms. We can trace the origins of the saying “all calm before the storm” back to 1601. In Lewis Machin and Gervase Markham’s play, The Dumb Knight, the phrase makes an appearance.

Fast lock’d in her bed, with a close ward to devour thee my brave paraquito; but hush, no words, there is a calm before the tempest.”

The quote may be an excellent characterization of the cryptocurrency markets as the end of 2021 is only four months away. After trading to highs of $65,520 on Apr. 14 and $4,406.50 in May, and fell to more than half those levels and recovered. As Bitcoin sits at the $50,000 level with Ethereum at $3,940 at the end of last week, it could be a quiet period before the crypto frenzy returns with a vengeance.

Opponents of the burgeoning asset class continue to call for its demise. Last week, John Paulson, the investor who made billions on the 2008 housing crisis, said crypto is a “worthless bubble.” Supporters are calling for Bitcoin’s price to rise to $100,000 by the end of 2021. Some see Ethereum reaching $8000 to $10,000 per token later this year.

The bottom line is that the cryptocurrency leaders are currently sitting in the eye of an either bullish or bearish storm, depending on who you believe.

At the end of last week, Bitcoin was back above the $50,000 level, with Ethereum around $4,000 per token. Since the late June low, the trend in both of the leading cryptos has been higher.

The chart of September shows a higher low in late July compared to late June and steady gains from July 26 through early September. The latest high came last Friday at the $51,260 level.

was flirting with the $4,000 per token level on Sept. 3, more than double the price at the June and July lows.

At the most recent high, Bitcoin recovered by 77.8% from the June 21 bottom. Ethereum has done better with a nearly 136% gain.

The market has embraced Ethereum’s protocol over the past months. Ethereum is more versatile than Bitcoin as it processes transactions faster than the leading cryptocurrency. Moreover, in a world addressing climate change, Ethereum is less energy-intensive, making it a greener crypto.

Bitcoin and Ethereum continue to dominate with 61.9% of the market cap. Cardano’s (ADA) $96.074 billion reflects only 4.2%. ’s value is one-tenth of Bitcoin and around one-fifth of Ethereum.

The flood of new tokens coming to the asset class has continued despite the price action in cryptocurrencies. As of the end of last week, just over 11,600 tokens were floating around in cyberspace.

Levels to watch in Bitcoin and Ethereum futures

Bitcoin and Ethereum look set to challenge the April and May all-time highs over the coming weeks and months. Technically, both experienced parabolic bullish runs, brutal corrections, consolidation, and rebounds.

While markets across many asset classes can take months or years to go through the price cycle, in cryptos, the process seems to happen in the blink of an eye.

The evolution of the crypto revolution or fintech may be better characterized as fast-tech.

The chart above highlights the critical levels for Bitcoin, $28,800 on the downside and $65,520 on the upside. The current trend favors a run to the highs over another test of the lows.

In Ethereum, support stands at $1697.75, with resistance at $4,406.50 per token. Ethereum was probing around the $4,000 level at the end of last week. The odds favor a new high for Ethereum sooner than Bitcoin rising to new record levels.

Watch Square: the company could emerge at the forefront of the asset class

“It reminds me of the early internet.”

“Bitcoin changes absolutely everything…I don’t think there is anything more important in my lifetime to work on.”

Dorsey is a technology pioneer; as co-founder and CEO of Square—he holds the same position at Twitter (NYSE:)—Dorsey runs a pair of publicly-traded companies with a combined $175 billion market cap as of the end of last week. While TWTR, the social media company, has the higher profile, SQ, his payments company, is worth over twice as much.

Square is working on an open platform that will create a decentralized exchange for Bitcoin, with applications for other leading cryptos. Dorsey realizes that custody and security are the Achilles’ heel of the asset class. SQ is perfectly positioned to solve the issue and Dorsey has tweeted about a “new #Bitcoin hardware wallet.” 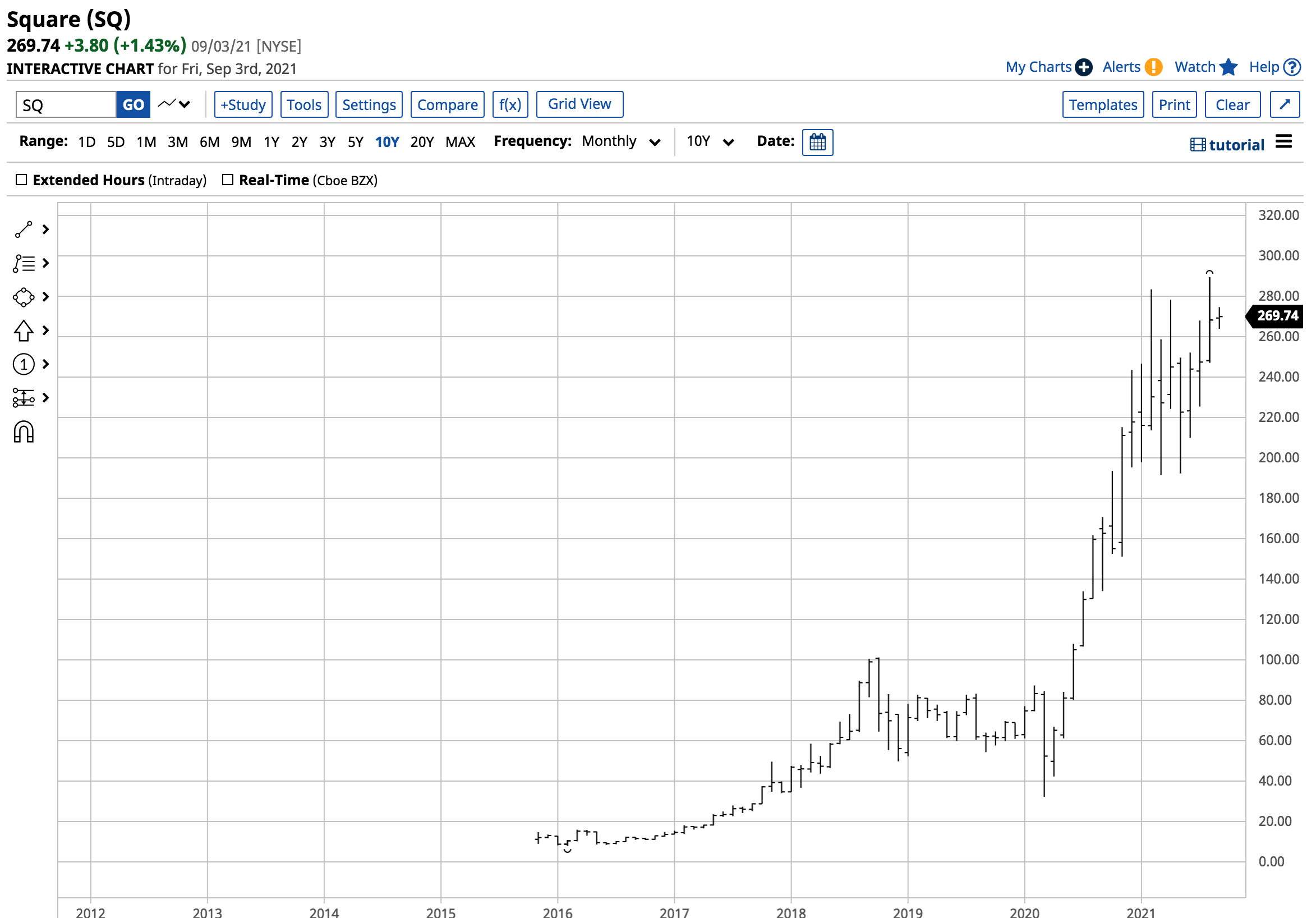 The bullish trend in cryptocurrencies and Square’s efforts to address custody and security will likely put the company at the front of businesses that benefit from the asset classes’ continued growth.

Bitcoin, Ethereum, and cryptocurrencies were in the eye of a bullish storm as they consolidated after falling from record highs. As we move towards the end of 2021, the eye seems to be passing, and the bullish winds are whipping around once again.