Looking at the major cryptocurrencies and their intraday charts, some of them may have already completed first leg A/1, while some of them can be still unfolding it. Anyway, in any case watch out for a continuation lower once current corrective rallies fully unfold, either in sub wave iv or higher degree wave B/2.

Ripple, dropped big and sharply after we noticed strong resistance and 5th wave. So, with current break below trendline, seems like we can now expect a new three-wave decline at least back to 0.78 area for wave (C) or maybe even down to 0.51 area for wave (3). 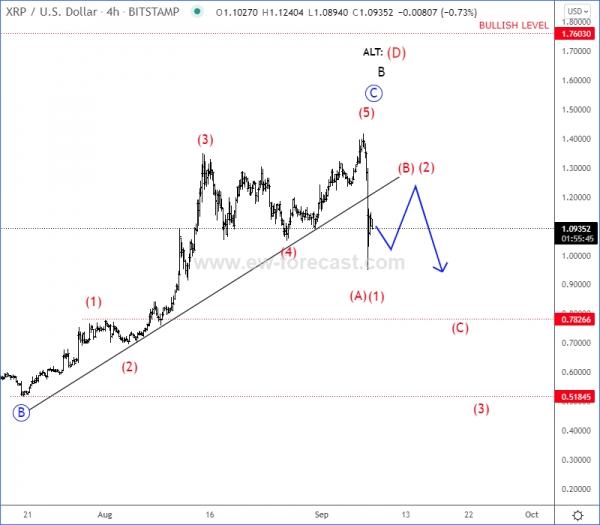 Disclaimer: Fusion Media would like to remind you that the data contained in this website is not necessarily real-time nor accurate. All CFDs (stocks, indexes, futures) and Forex prices are not provided by exchanges but rather by market makers, and so prices may not be accurate and may differ from the actual market price, meaning prices are indicative and not appropriate for trading purposes. Therefore Fusion Media doesn`t bear any responsibility for any trading losses you might incur as a result of using this data.

Fusion Media or anyone involved with Fusion Media will not accept any liability for loss or damage as a result of reliance on the information including data, quotes, charts and buy/sell signals contained within this website. Please be fully informed regarding the risks and costs associated with trading the financial markets, it is one of the riskiest investment forms possible.