Many investors are weighing their options in the cryptocurrency market these days. The two biggest names in the sector draw more attention and analysis than most. We asked two of our cryptocurrency writers to determine whether Bitcoin (CRYPTO: BTC) and Ethereum (CRYPTO: ETH) would be the better choice for an individual investor today.

Read on to see the pros and cons of picking one of these household names over the other.

Bigger is just better this time

Anders Bylund (Bitcoin): Most investors in the cryptocurrency space are probably best served by holding both some Ethereum and some Bitcoin. But if I had to choose just one of these sector giants, it would have to be Bitcoin. There are two main reasons for this conclusion.

First, many cryptocurrencies are trying to do the same thing as Ethereum, and some of these alternatives come with significant technology improvements. I count three Ethereum rivals among the top 12 cryptocurrencies by market cap.

Taken together, this trio is already worth 25% of Ethereum’s total market value. All have also outperformed Ethereum in 2021, often by a large margin: 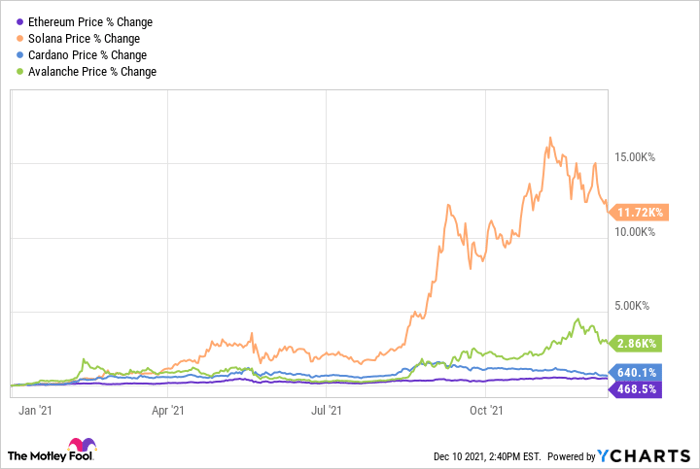 Bitcoin has rivals but the simpler value-storage and money-moving functions of this cryptocurrency leave less room for disruptive challengers. Add up the five largest digital currencies not named Bitcoin in this part of the cryptocurrency sector, and you get a total market value of $107 billion — a mere 12% of Bitcoin’s dominant footprint.

That’s where my second reason to prefer Bitcoin comes in. The cryptocurrency industry’s grandfather holds an important first-mover advantage.

The long-term winners in this subsector must work to gain acceptance by (deep breath) consumers, governments, banks, investment managers, financial services, retailers, subscription services, charitable institutions, street-corner acrobats, and birthday party entertainers. And more, of course — those are just the most obvious money-handling categories off the top of my head.

Bitcoin is already working its way into most of these segments (except the party clowns, who may drag their color-spangled feet more than most). Other digital currencies are trying to follow suit but Bitcoin is setting the pace for the industry as a whole. For example, any retailer that accepts Litecoin or Dogecoin is guaranteed to take Bitcoin, too. And that’s not a two-way street.

So, Ethereum faces massive competition in a sector where better functionality is more important than tradition and early adoption. Bitcoin has fewer and smaller rivals in a target market where a single early winner could very well make any other solutions irrelevant in the long run. That’s an easy choice, assuming I can only pick one name.

Keith Speights (Ethereum): Years ago, Avis Budget (NASDAQ: CAR) was the No. 2 rental car company. It ran a highly successful marketing campaign centered on the theme: “Why go with us? We try harder.” I think this slogan is applicable to Ethereum.

Ethereum ranks as the No. 2 cryptocurrency based on market cap behind only Bitcoin. But it’s rapidly gaining ground. So far this year, Ethereum has outperformed Bitcoin by close to a sevenfold factor. Developers are choosing the blockchain platform because of its support of smart contracts that support non-fungible tokens (NFTs) SEO hubs and a long list of decentralized apps.

I look for Ethereum to pick up even more momentum in 2022. The second and third phases of a massive upgrade (called Ethereum 2.0, or Eth2) are planned for next year. This upgrade will make Ethereum much faster and much cheaper than it is today. All of the advantages that have attracted developers and buyers will remain intact, though.

Maybe Ethereum won’t bump Bitcoin out of the top spot anytime soon. But because its development community is trying harder, I expect it will be a bigger winner than Bitcoin will be.

10 stocks we like better than Bitcoin
When our award-winning analyst team has a stock tip, it can pay to listen. After all, the newsletter they have run for over a decade, Motley Fool Stock Advisor, has tripled the market.*

They just revealed what they believe are the ten best stocks for investors to buy right now… and Bitcoin wasn’t one of them! That’s right — they think these 10 stocks are even better buys.

Anders Bylund doesn’t play favorites. He owns Bitcoin, Cardano, Ethereum, Litecoin, and Solana. Keith Speights has no position in any of the stocks mentioned. The Motley Fool owns and recommends Bitcoin and Ethereum. The Motley Fool has a disclosure policy.