There are many ways to get started as a cryptocurrency investor, but how do you pick the port of entry that’s best for you?

We asked two Motley Fool contributors to stack up the Cardano ( ADA -9.77% ) cryptocurrency against the Coinbase ( COIN -1.78% ) blockchain-focused trading platform. Read on to see why one of our experts prefers Cardano’s exciting potential and the other craves Coinbase’s inherent stability.

Investing in the nuts and bolts of the cryptocurrency market

Anders Bylund (Coinbase): Cardano is a fine cryptocurrency, and I own some myself. Coinbase has not yet found a place in my portfolio — but I’m itching to buy some these days.

Picking the next big thing in cryptocurrencies and blockchain networks is a lot of fun and can be rewarding in the long run, too. However, it also makes sense to lay down a fundamental investment or two that can keep me gainfully invested in this space no matter which ones are the long-term winners.

For the stock market, you can do that by investing in a broad-market index fund like the Vanguard S&P 500 ETF ( VOO -0.57% ), which mirrors the S&P 500 ( ^GSPC -0.51% ) benchmark. It’s not that easy to find a market-spanning tracker for the cryptocurrency sector, though. There are funds that focus on trading or holding cryptocurrency futures, and a couple of investment vehicles tracking a number of publicly traded companies in the sector. But there’s no equivalent to the S&P 500 index for digital currencies, and index funds tied to any such index are probably many years away.

The best way to get sector-wide exposure without separating winning cryptocurrencies from long-term losers is to invest in the nuts and bolts. Coinbase does exactly that. The company stands to win as cryptocurrencies, in general, penetrate the global mainstream culture and financial systems.

If the pacesetters in today’s early going turn out to be champions in 10 or 20 years, Coinbase will have gained from their rising profile all along. And if they don’t pan out, Coinbase still wins when people are trading and using the next big thing — which may not even exist yet.

I’ll continue to pick individual winners among the growing group of cryptocurrency options, but I would also love to have some of Coinbase’s fundamental stability, as well. And the stock is trading at a discount these days, more than 40% below early November’s 52-week highs. 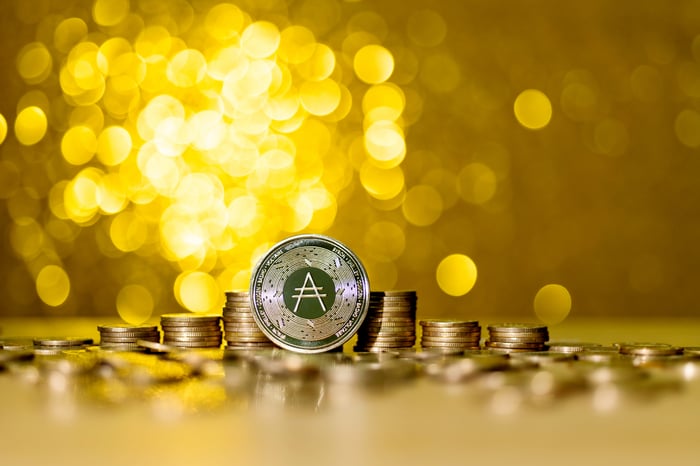 Taking the coin over the Coinbase

Rick Munarriz (Cardano): The argument for Coinbase over any individual crypto likely revolves around buying the basket instead of an individual egg inside said basket. I get that. Coinbase also benefits on trading volume — cashing in on the ups and downs — unlike Cardano, where there’s only money to be lost on the downticks. I get that, too. However, if you could own a superior crypto — a superior egg — wouldn’t that be better than the basket case?

Cardano is crypto elite. It’s the fifth-largest digital currency by market cap. It has advantages over some of its more valuable peers in terms of the number of transactions it can carry out in a set amount of time, as well as the related costs. As a decentralized proof-of-stake blockchain platform, Cardano holds up well as an eco-friendly alternative to the market’s two better-known denominations.

Cardano doesn’t just look good on the spec sheet. Its latest update in September is opening up the realm of smart contracts and other next-gen use cases.

Circling back to Coinbase, some of the bullish points I made earlier about the world’s largest crypto trading exchange also have some worthy bearish counters. Coinbase requires trading volume to increase across the crypto market to keep improving, but Cardano marches to the beat of a different drum. Coinbase experienced a nearly 30% sequential dip in trading volume for the third quarter, and its base of monthly transaction users also took a step back from where it was three months earlier.

Cardano, on the other hand, soared 53% during the same three-month period. With upgrades in the works that will improve its speed and scalability, Cardano’s future is bright.

There’s nothing wrong with buying baskets, but something tells me that you’re pretty good at picking the good eggs yourself.